Understand how to use Teams to mimic your company’s structure better and address its needs.

Please note that this feature is only available for Probely Plus.

Teams provide a way for you to group Users, API keys, and Targets in one place so that managing them becomes easier and time-efficient.

You can create multiple teams for one account. Teams act as independent units/groups and help you separate and assign targets for each team, limit the number of targets, set scopes, and user roles. One user can be added to different teams and assigned roles that don’t affect one another, such as an admin, developer, or a custom role. 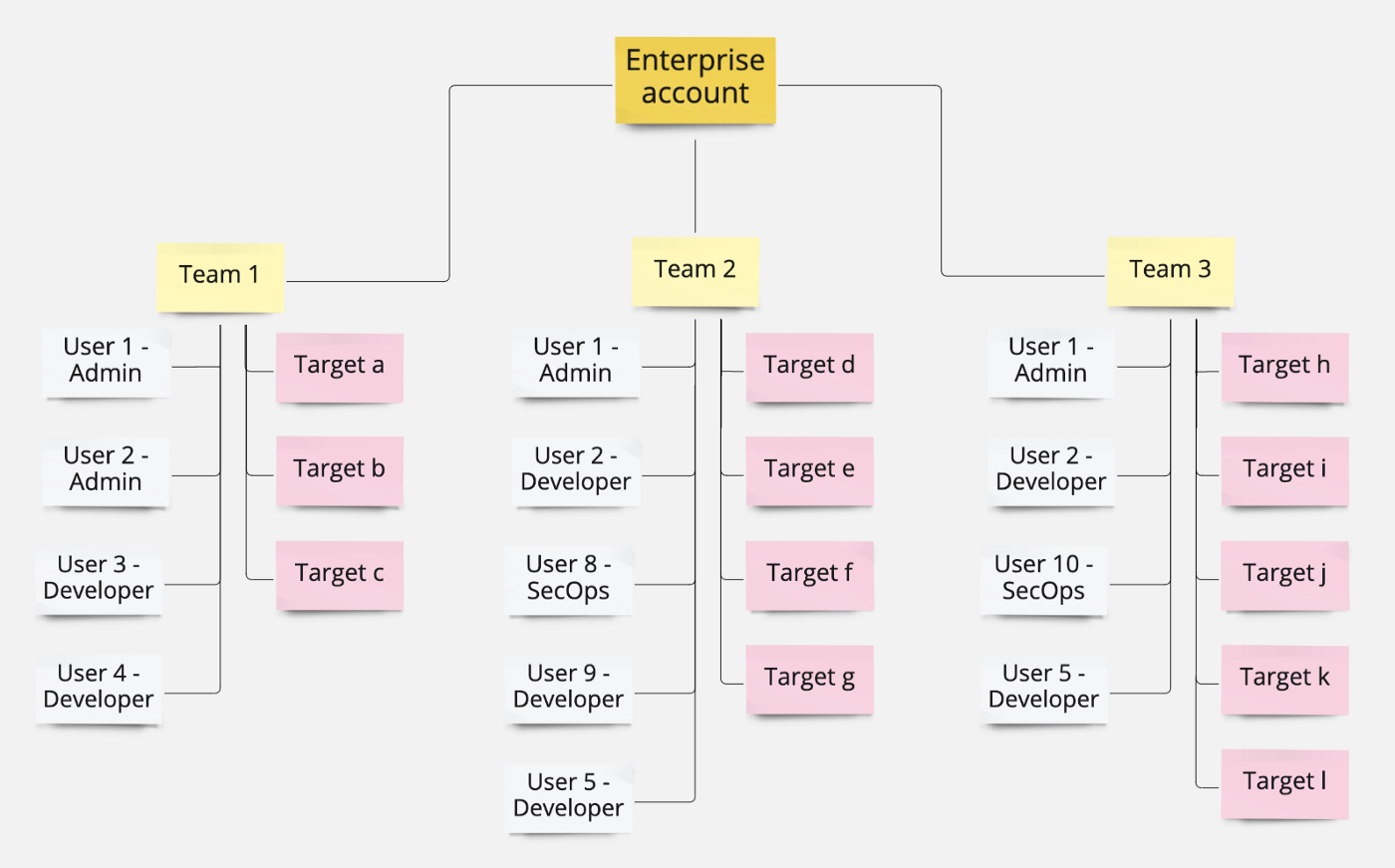 Teams allow you to:

You can create Teams on your account to mimic your organization’s structure, adding a team for each department or group of individuals working in the same context/projects. Then you can add those projects as targets to the team, so everyone on the team can access them.

Teams are particularly relevant if you need to define team members’ access to specific projects.

Use Case #1 - Mimic your company’s structure with teams

The most common case is when your organization has different teams (or business units), and each team owns different projects or responsibilities. You don’t want a member of team A to see or start scans on targets from team B and vice-versa.

Use Case #2 - Using Teams as groups and managing user access

Suppose a team member needs to be able to list some targets and start scans. Instead of giving them access to the whole account or setting up a target-specific role for all targets, you can add the corresponding targets to the team and assign a team-specific role to that team member.

For example, a user that works on multiple projects at once can simultaneously have the following roles:

Use Case # 3 - Using API keys to manage access within teams

You can do the same for API Keys by accessing the new menu entry API Keys and either adding a new API Key or editing an existing one.

Just like for Users and API Keys, you can also define a specific target’s scope by adding a new target or editing an existing one. Suppose you assign a target to a team. In that case, members of that team can access it. Depending on the role they have in the context of that team, what they can do on the target may vary.

Suppose the target is bound to the account / global level. In that case, only users with a Global role can list/view/change or otherwise interact with that target. Depending on their role in a global/account context, what they can do on the target may vary.

Note that a target can only belong to a team at once. Suppose a specific target belongs to a team, and you need to allow a user to access that target but don’t want to give them access to every target from that team. In that case, you can always assign a target-specific role to that user, going to the Users list, as explained above.

Learn how to create and configure Teams.